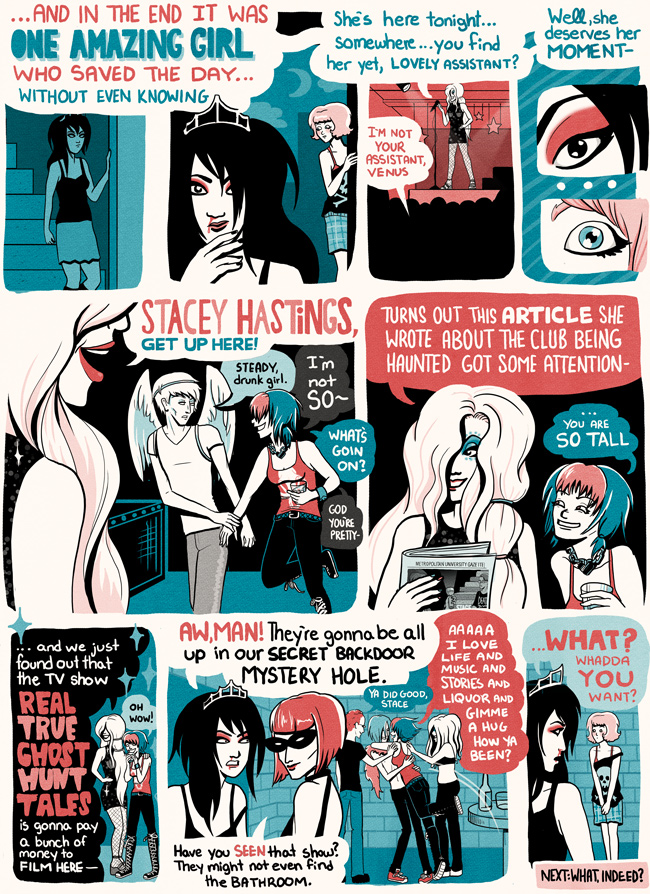 24 Comments on An Unexpected Hero Vs. Her Moment Of Glory

Ok — here comes a better accompanying post for this one. I just put up a placeholder late last night due to being undead-tired.Things of note:

Something cool and unexpected happened in the comment thread for the last page, in case you missed it: a reader named Trisha made a video tutorial for doing Venus Destructo eye makeup! Makes me want to try it, too — if I do, I’ll post a picture.

I think I’ve mentioned before that I grew to really like Stacey as a minor character — she’s like this high-spirited underdog with questionable judgement — so, here’s her moment to Be The Hero. Ya did good, Stace.

Bonus trivia, which I’m sure anyone local has already noticed: I have a little theme going on where I like to use streets in Vancouver as BVB characters’ last names. It’s not universal, just a few of them…I’ve already used Hastings, Davie, Cordova, and Alberni, and have several others that I like the sound of  picked out for future use. It’s partly the fun of a theme, partly out of city-love, and partly just thinking that it’s a great name-set.

Is it bad that all I hear is jaws music. I guess I see honeys revelation that not only does she like girls but Turps of all people to be as shocking to her as a giant man eating shark would be to us.

“All up in our secret backdoor mystery hole.” Wow. Just wow.

I was basically thinking “Y’know, it’s been TOO LONG since I’ve had one of these characters phrase something in an incredibly vulgar way without really meaning to.”

“I want what everyone wants. To kiss the blood away from your face.”

re: Kabuki: this kinda relates to one of the character design principles in my mental BVB style bible:
Q: How do you convey “heavy eyeliner” in a comix world where the whole illustration style is so based in black ink lineart, and every eye has an outline?
A: DRAMATICALLY is how.

Loving this series! Turpentine and Honey are so Marceline and Bubblegum (Adventure Time). That’s a great thing.

Thank youuu!
Heh, this isn’t the first time I’ve heard this Marceline/Bubblegum comparison…and it’s pretty apt, and I LOVE Adventure Time…and yet somehow this never even occurred to me until other people brought it up!

I, uh, creepily enough had a dream about this comic. I don’t really remember what happened, but Honey and Turpentine kissed, and everything looked very pretty and glossy.

Oh, I like this a lot. I’m also imagining that the “glossy” version of this world looks super over-the-top like Lisa Frank stickers or something.

Aw, I know! I’m so sorry…new comic just didn’t happen this week. Right now I’m not sure whether it’s realistic to set a target within the next couple of days, or whether I should just bump it to next Monday in the interest of getting this schedule back on track.

Well, on the one hand, I completely respect your schedule and life outside of this comic, and recognize that I am not paying you for your time. On the other hand…I totally vote “NEXT COUPLE OF DAYS”. :D!

I hate being such a letdown today!

I think you owe us some fan service….maybe? Just sayin’…

Noooo, no fan service! Fan service is super creepy! It’s like the author has to wrangle up the characters and be like LOOK, I GOT DEBTS TO PAY; GET YOUR CLOTHES OFF. It’s against the World Inside!

I don’t feel as strongly against this as you do, Jeanne (although I agree that such things frequently come off creepy!) I kinda like cute, pinup-style character illustrations, and I think this works best when it’s like a little moment that seems perfectly in character based on what you know of this person. BVB is the kind of goofy, kinda-smutty-at-heart world that seems not-inconsistent with this within its own universe rules.

I tend to think that what makes it *against* the integrity of a fictional world is if it’s a mismatch — like, the tone/context/characterizations are off, or something fundamental is getting ignored or compromised. Additional Unpleasantness Points can be earned if the artist seems to be approaching it from a creepy place.

Hahaha, Jeanne’s comment made me laugh. I imagine she’s saying fan service can make the artist seem like a pimp.

My most hated type of fanservice is the type where there’s some meta thing going on where it’s like the characters are being pimped against their will, and uncomfortable about it! Y’know, like they’ll be saying something like “HOW COULD YOU DRAW ME LIKE THIS, AND WHERE DID YOU HIDE MY PANTS?” in a futile attempt to rage against the Drawing Hand Of God, and there’s some sleazy link underneath to donate cash for the high-res wallpaper-size version of the image.

I meant it to be exactly the kind of fan service fitting to the bandvsband world. Not the creepy kind!